As you may be aware, the Maryland Office of the Attorney General filed a motion in court today seeking permission to publicly release a report on his office’s four-year investigation of the Archdiocese’s handling of child sexual abuse allegations dating back to the 1940’s. The information contained in the motion will no doubt be a source of renewed pain for many, most especially those harmed by representatives of the Church, for the lay faithful of our Archdiocese, as well as for many good priests, deacons and religious. Ever-aware of the pain endured by survivors of child sexual abuse, I once again offer my sincere apologies to the victim-survivors who were harmed by a minister of the Church and who were harmed by those who failed to protect them, who failed to respond to them with care and compassion and who failed to hold abusers accountable for their sinful and criminal behavior.

I will continue to apologize as long as there are people in pain, and pledge to continue to do everything possible to ensure that no one in the Church’s care is ever again harmed by a representative of the Church!

The motion filed in court today references more than 600 victims of abuse by representatives of the Archdiocese. Sadly, we know horrifyingly well the enormity of the grievous harm caused to individuals, families and entire communities from our past experience of publicly naming the 152 priests and brothers we believe have abused children.

Upon reading today’s motion, we feel renewed shame, deep remorse and heartfelt sympathy, most especially to those who suffered from the actions of representatives of the very Church entrusted with their spiritual and physical well-being.

Reports about today’s motion will undoubtedly conjure a range of emotions and lead to confusion and questions, including about the Church’s commitment to transparency. Such questions might arise specifically due to the motion’s reference to 158 priests accused of committing child sexual abuse while serving on behalf of the Archdiocese. It is difficult to make a direct comparison between this number and the 152 priests and brothers on the Archdiocese’s website list of accused, but we know that the Archdiocese has publicly stated, after consultation with its Review Board, that its list does not include the names of priests or brothers who died before a single accusation of child abuse was received, unless the allegation could be corroborated by a third party or unless a second allegation was made against the same deceased cleric. The list is posted on the archdiocesan website and is regularly updated as new information becomes known.

Further confusion may arise from today’s motion about the current response by the Archdiocese to allegations of child sexual abuse. Conclusions drawn from historic events in today’s motion, while a continued source of shame and remorse, do not reflect the Archdiocese’s current and decades-long strong pastoral response and handling of allegations of child sexual abuse. For decades, the Archdiocese has fully complied with child protection efforts including: reporting to law enforcement of all allegations of child sexual abuse; zero tolerance resulting in permanent bans of any employee or volunteer credibly accused of abuse; offers of counseling assistance and pastoral outreach to anyone reporting harm by a minister of the Church; extensive screening and training of all Church ministers, employees and volunteers; continued accountability and oversight by our Independent Review Board and national compliance auditors; and open communication about newly received credible allegations of abuse, including through the list of credibly accused priests posted on the archdiocesan website and through various other archdiocesan communications channels, the media, and Church institutions.

For some, the Attorney General’s motion may help provide answers they have spent years awaiting. For others, it may reopen wounds or feel as an inadequate or incomplete account of justice. To all, however, I pray it brings some measure of healing of the deep wounds caused by the scourge of child sexual abuse in the life of the Church.

CHILD PROTECTION EFFORTS - ST. LOUIS & ST. FRANCIS OF ASSISI PARISHES
An update on our ongoing efforts to create a safe environment for our children and adults.
Within our Pastorate and our Diocese, the Church adheres to the following practices:
1 – Online Training for Child Protection
Any volunteer or staff member of the Catholic Church who has interaction with a minor under the age of 18 must complete a screening process called VIRTUS. This process includes:
This applies to priests, deacons, parish staff, teachers, coaches, and parent volunteers.
2 - Psychological Evaluation for Clergy
When men apply to become priests or deacons, they also undergo special psychological evaluations to ensure that they have good emotional, psychological, and sexual maturity.
3 – Handling of Accusations
When an accusation is made of inappropriate conduct with a minor, and the Archdiocese deems it credible, the priest/deacon/teacher/coach/volunteer can no longer serve in any capacity. This is a strong stance. There is zero tolerance. The person cannot resume ministry unless proven innocent.
4 - Ongoing Review of Accusations
Another step the Church is taking is to have two different review boards that meet regularly to discuss any accusations or ongoing investigations in the Archdiocese of Baltimore involving our 140 parishes, 40 elementary schools, and 18 high schools. These boards are composed of lay men and women, as well as clergy. These boards include individuals in law enforcement and counseling.
5 - Ethics Hotline
The Archdiocese of Baltimore established an Ethics Hotline so that parishioners could forward ethical concerns about parish staff, clergy, and even bishops to the Archdiocese.
6 - Accountability
As early as 20 years ago, in 2002, Cardinal Keeler of Baltimore began publicly releasing the names of any priests in the Archdiocese who had been accused of inappropriate conduct with minors. At this time, the Archdiocese of Baltimore has given approximately $6 million to the victims to help them with counseling and rebuilding their lives. Since 2002, the Archdiocese has published the names of 150 priests and religious brothers who were credibly accused. This is an ongoing effort to be transparent to parishioners and people of our Archdiocese. 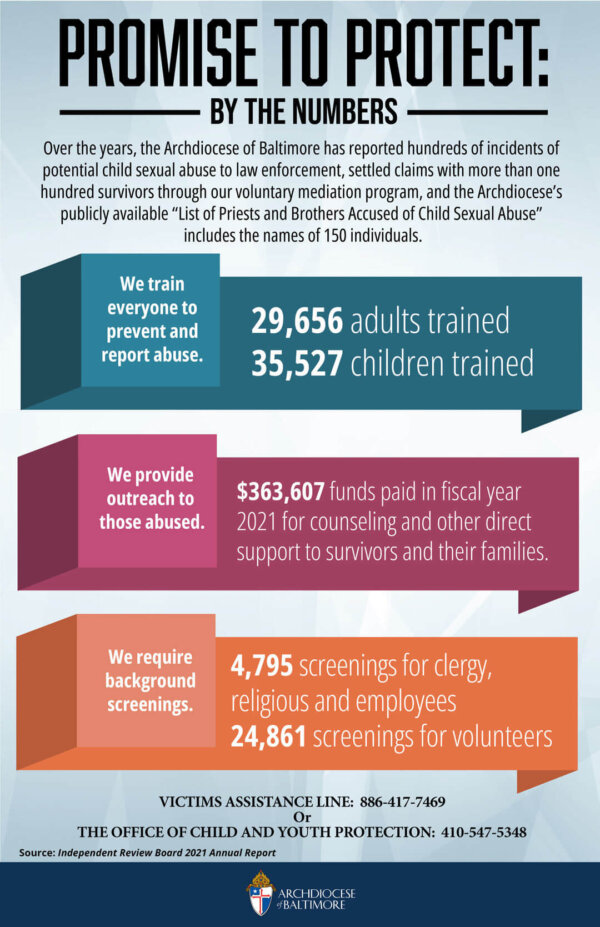 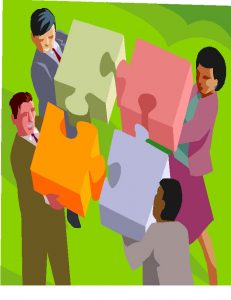